In the UAS sector, we can find various technological initiatives that propose the use of a large number of medium-sized, unmanned, cooperative, highly autonomous vehicles that are easy to deploy, recover, and maintain. These vehicles will be reusable, but with reduced life cycles, so their loss can be assumed in a mission, protecting more valuable assets in disputed areas. That is why many experts [1] identify this new class of UAS with the term "Low-cost Attritable UAVs" (LCA-UAV), which refers to attrition warfare, highlighting that the reduced costs and manufacturing times are key to having a large number of operating units.

It is important to highlight that the concept is not intended to eliminate larger manned assets from the system but to complement their capabilities, reaching where they cannot be due to the risk of the operation, converting manned elements into advanced command and control centres to manage these new systems.

This concept is linked to a reduction in the unit cost of the platform, which is usually linked to a reduction in its size and, by extension, to a limited operational range when compared to that of the manned systems it complements. The result of this is the need to deploy them closer to the theatre of operations. One of the solutions to this problem is their deployment from aircraft with a greater range, not necessarily manned, that brings them closer to the theatre of operations. It is not a new proposal, and we find similar applications such as the AQM-34 Ryan Firebee (1952) [2] installed in Lockheed DC-130 aircraft to extend its range of action in surveillance operations during the Vietnam War or as decoys and dispensers of radar jammers during the Gulf Wars. Also, the Japanese TACOM program [3] proposed the transport of two UAVs in a mother aircraft, in this case, an F4EJ and later an F15J.

In both projects, we observe that the unmanned system incorporates a launch sequence, after which it spreads its wings if necessary and activates its control system to stabilise the platform and start the mission.
This capability is once again topical due to the inclusion in future weapons systems such as FCAS or Tempest of the "Manned Unmanned Teaming" (MUT) concept, in which systems of both types of aircraft cooperate in the execution of complex missions [4 ].

Description and requirements of the proposed manoeuvre

The manoeuvre is initiated from a mother aircraft with underwing pylons adapted for this purpose and where the release is produced exclusively by gravity. During this manoeuvre, and to optimise the maximum number of transported aircraft, the UAV will remain with the wing folded, thus reducing its wingspan until its release.

At the time of the release, the mother ship must maintain a straight and level flight within the envelope of both aircraft, thus imposing a compatibility requirement between both.

For the simulation conducted, a fixed-wing UAV with a turbojet and the ability to deploy the wings in a symmetrical and controlled manner was considered. The control surfaces are ailerons located on the wings and ruddervators on a V-tail. The plant model and the control laws have been implemented using a “Hardware-in-the-Loop” (HIL) type simulator.

Thus, the release manoeuvre consists of the following phases:

In this initial phase, the Low-cost Attritable UAVs are solidly linked to the transport aircraft. For security reasons, any automatic action that leads to stability problems for the whole must be blocked, always prioritising the safety of the mother ship.

The activation of the launch sequence is carried out from the control station, which can be embarked on the mothership itself, allowing a complete execution from the carrier aircraft itself.

2.2 Release, initial trim and deployment of the wing

After the release, a free flight phase begins in which the A UAV remains with a command of fixed controls. Once an established safety distance has been reached from the wet nurse, control actions begin.
The initial trim of the aircraft plays a fundamental role in ensuring a clean release and achieving the desired attitude at the time of deployment.

This is obtained from a series of design decisions. The first requirement is minimum separation from the parent aircraft at the time of wing deployment, where destabilisation of the autonomous vehicle is most likely. Once the freefall path is defined, the wing must deploy in an attitude within the flight envelope and with an angle of attack away from the wing stall angle, which requires a dive moment to reduce the angle of attack during this first phase.

Once the wing deployment is completed, the attitude control is activated, which seeks to stabilise the aircraft in the shortest possible time.

In addition, a progressive increase in the engine speed is carried out up to a preconfigured value that ensures a safe speed until the subsequent activation of the guidance loops. These precede the attitude loops to avoid possible coupling of the thrust vector in the initial stabilisation of the platform. In the event that unforeseen attitudes have been reached during the unstabilised phase of the manoeuvre, the transition to the configured attitude will occur in such a way that the structural limits of the aircraft are not exceeded.

Once the unmanned system has stabilised, the guidance loops are activated. The determining factor is its correct initialisation since the height and position at which its activation occurs are not previously known.

Once the aircraft is stabilised, the system automatically proceeds to its programmed flight plan, moving away from the parent aircraft and beginning its mission autonomously. Control station and situational awareness.

The risk of collision between the two aircraft does not end once the release manoeuvre is complete, as both continue in relative proximity. While not required, it is recommended that both systems continue to have mutual visibility.

To this end, UAV Navigation proposes a graphical interface (see Figure 1) located on the control station, such as its Visionair control station, which enables better situational awareness by displaying the current and predicted trajectory of the UAV. This tool also allows the definition of "non-authorised flight zones" (NFZ) that establish protection areas around the rest of the aircraft present that, together with flight termination systems (FTS), increase the safety of the operation.

Note that the graphic representation is made in plan for an intuitive and quick interpretation of the manoeuvre by the ground station operator, but that, nevertheless, the protection area represented as an unauthorised flight zone will consist of a cylinder that protects the overflight of one of the aircraft at a short distance from the other. 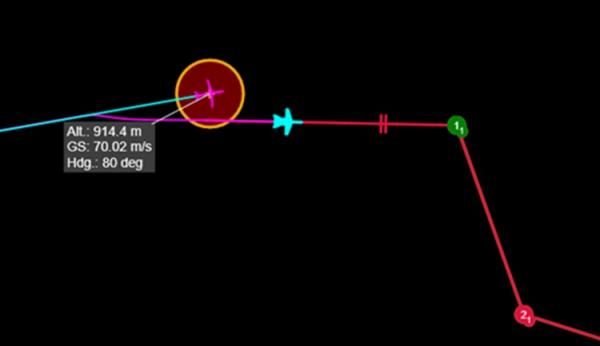 For the initial validation phase of the manoeuvre, a "Hardware-in-the-Loop" (HIL) type simulator has been used, which allows the interaction between the model and the different guidance, navigation and control logics equivalent to those of actual operation [5].

As seen in Figure 2, the simulator includes the simulation of the UAV, the mother aircraft and the possibility of interaction between them, including the release manoeuvre. For the simulations, a dynamic model based on an LCA-UAV with a MTOW of 120 kg and a maximum speed of 400 kts has been used, looking for similarity with the concepts of "remote carriers" raised in current weapons systems [5]. The release has been simulated at 150 kts.

In this whitepaper we have analysed the modelling and automatic control that govern the release and deployment of a "low-cost-attritable" UAV from another aircraft in flight.

VECTOR-600 flight control systems are capable of adapting to the most demanding operating environments.

These types of manoeuvres involve a high degree of complexity due to the proximity of the manned aircraft to the UAV, so one of the main challenges is related to the definition of an adequate activation sequence for the different control loops and their adjustment.

In the same way, a simulation of the manoeuvre in a "Hardware-in-the-Loop" type simulator has been incorporated into the document, as well as a representation of the graphical interface visible to the operator to provide a better and easier understanding of the manoeuvre.

This development demonstrates the ability of UAV Navigation to adapt to the specific requirements of each aircraft. For more information on the advanced capabilities of our products, contact UAV Navigation.