Why is it important to be able to have a precise attitude estimation without GNSS? Global Navigation Satellite System (GNSS) technology is used in UAV systems to measure translational states (position and velocity) both onboard the aircraft and also for the position of the Ground Control Station (GCS). Specifically, a GNSS receiver can provided its latitude, longitude and altitude above a reference, in addition to its three-dimensional inertial velocity vector. This information is vital to ensure that the guidance system onboard the aircraft performs correctly; assuming that the current position and the desired final position are both known, a trajectory can be calculated in order for the autopilot to control the aircraft to the next waypoint. 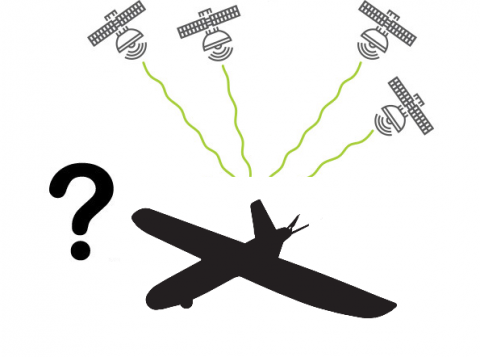 On the other hand, rotational state estimation (attitude and attitude rate) is critical for any automatic flight control system; this is because state estimation allows the system automatically to stabilize the aircraft in all axes, prior to any guidance being implemented. A MEMS*-based Attitude & Heading Reference System (AHRS) makes use of a triad of orthogonal gyroscopes and accelerometers to estimate the platform’s attitude.

The low-frequency attitude information provided by accelerometers complements the high-frequency attitude information from the gyroscopes. UAV Navigation’s AHRS also includes a 3D MEMS-based magnetometer that provides data on body yaw angle regardless of vehicle orientation. Different algorithms are used to fuse or combine the information provided by different sets of sensors in order to define the orientation of the platform relative to the horizontal. However, in non-stationary applications velocity is also required in order to estimate and subtract the inertial forces that are the result of long-term accelerations.

If the increase in velocity is measured onboard the aircraft it will be possible to estimate the inertial acceleration and subtract it. Such inertial accelerations may also be acquired from the onboard GNSS system, which is generally more precise. However, the use of GNSS technology in calculating attitude carries with it inherent risks: the GNSS system may be vulnerable to loss of signal due to a variety of reasons (spoofing, lack of satellite visibility, jamming etc). The UAV Navigation system is protected against this vulnerability by ensuring that the autopilot will continue to control the UAV safely even if the GNSS signal is unavailable; see also Dead Reckoning Operations.

In addition to this inertial navigation capability, the UAV Navigation POLAR AHRS also includes a built-in Air Data System (ADS) which is able to estimate inertial velocity from measurements provided by airspeed (body velocity measurement), as well as other variables which can be estimated during flight. The information from the ADS is used to estimate roll and pitch angles even when the GNSS is unavailable, again increasing safety.

This is a major advantage of the UAV Navigation system over other inferior products.

Inferior systems which do not include an ADS will not be able to measure inertial forces and the artificial horizon will become unstable or unuseable. When GNSS signals are unavailable this will lead to a loss of control and the subsequent loss of the aircraft.

UAV Navigation has invested considerable time and resources into developing an AHRS which provides robust and reliable estimation. This in turn maximizes the safety of flight at all times.

Not all autopilots and AHRS units are created equal! In case of GNSS signal loss, the system will continue to calculate its attitude accurately and will be able to continue flying safely.