Redundancy in UAV Autopilots: The proof that quantity is not equal to quality 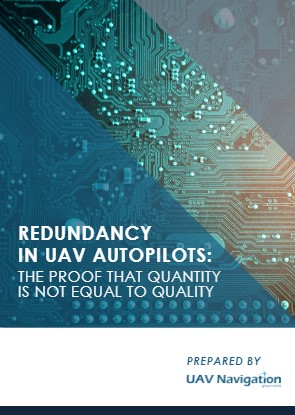 Redundancy is a commonly used term in the aeronautical industry, because safety is almost always the primary concern when designing any system. The starting point is to assume that any system may be subject to partial or complete failure. Consequently, the principal objective when designing a system is to reduce or eliminate any single point of failure which may lead to the loss of any critical system functionality. Part of this process may be the inclusion of redundant systems to ensure a Mean Time Between Failure (MTBF) greater than a defined level. In addition, it is important to understand the behavior of all sub-systems, by means of a Fault Tree Analysis (FTA) to be able to predict and plan for failure.

In this sense, and as an introduction to this matter, two concepts can be identified: hardware and functional redundancy.

Hardware redundancy has the dual advantages of reliability and full isolation; however it also has disadvantages such as additional cost, additional weight and the additional space required to accommodate a physically larger system, perhaps with great power consumption.

Functional redundancy, however, is based on a software solution that can be implemented on small processors without the disadvantages outlined above.

The fact that an aircraft is equipped with redundant hardware systems does not necessarily mean that the autopilot will be capable of continuing the mission in case of a partial or complete system failure. A better approach may be to design a system with a low probability of failure or a high MTBF. At UAV Navigation, we subjected our VECTOR-600 autopilot to a third-party and independent company study achieving an MTBF over 19500 hours. The study was composed of a Reliability Prediction Report (RPR), Failure Mode Effects and Criticality Analysis (FMECA), and Fault Tree Analysis (FTA).

On the other hand, UAV Navigation has invested significant resources into improving Functional Redundancy in order to improve MTBF for the system as a whole. Examples of the work in this area include the logic to detect engine failure, for example with automatic autorotation within the rotary wing solution, GNSS-denied navigation capabilities and predictive paths in the GCS software which provide the operator with a visual reference of the point where the aircraft will touch down. Another example is the failsafe logic that can switch automatically between CPUs without a reset.

Common Misconceptions or Drawbacks normally used when talking about redundancy

In order to achieve redundancy, some autopilot manufacturers use several replicas of a control unit together with a multiplexer. This has the attraction of being able to show two, three or even more autopilots side by side in a UAV installation which may look impressive. However, including multiple and identical systems but with high rates of MTBF is not the solution. To the uninitiated, it would seem that two autopilots are ‘obviously’ twice as safe as one, and so on. However, there are drawbacks to this approach:

UAV Navigation’s VECTOR family of autopilots has been designed and manufactured to demanding military standards (MIL-STD) and features a deterministic system with hardware and functional redundancy in critical components such as flight control CPUs and sensors. This design maximizes reliability (and therefore flight safety) without compromising the system with unnecessary additional hardware.

Redundancy is not only based on component duplication, as a low reliability of each component could lead to catastrophic results. For this reason, UAV Navigation has studied flight data collected over many years to improve system reliability. Additionally, the C ompany has used its years of experience developing advanced automatic safety logics and sensor fusion algorithms to enhance system reliability and robustness.

UAV Navigation's systems have been designed for use in UAS where there is a requirement to reach a compromise between size and weight, and which will not put at risk the platform or the payload. The design philosophy is to ensure operational reliability due to high reliability of components, sensor fusion logics, advanced flight control logics and additional features to recover the platform safely if required using techniques such as autorotation, gliding or a Flight Termination System (FTS) - some of which are now mandatory features under current legislation.