These missions will be carried out by two TG UAVs simulating a penetration attack over a coastline. At a given time, both TG will perform a coordinated evasive maneuver in response to an interception action launched by the defendant.

To successfully accomplish this mission, it is vital to understand how the VECTOR autopilots (AP) are commanded to achieve a synchronized operation of TG and UAVs. The main challenge is to complete this mission without using manual commands on the UAVs.

The first target drone (TG-A from now on) is launched from the catapult at the start of the mission. As soon as the TG-A finishes the take-off maneuver, the TG is commanded to climb to its designated flight level FL164 (5000 m) and fly towards the waiting point (Hold A1).

After 5 to 10 min, the necessary time to rearm the launcher and prepare the second drone, the second UAV (TG-B) would be launched. After its take-off maneuver, the TG is commanded to climb to the defined flight level of FL090 (2750 m) and fly to its waiting point (Hold B1).

When both TGs are in their waiting points, the attack is commenced and both UAVs are commanded to fly to the next waypoint (WP). During this flight, both TGs need to be synchronized so that they both arrive at their designated point at the same time (A for TG-A and B for TG-B).

After reaching this point, the flight continues, performing the penetration attack towards the coastline. After a moment, both TGs perform an evasive maneuver to avoid an incoming interception attack.

After this first attack, these maneuvers will be repeated to simulate a second wave attack. Finally, after the second attack, both TGs are commanded to perform a parachute landing recovery. 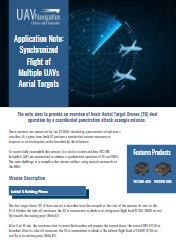