UAV Navigation in depth: Custom Gauges and Charts in Visionair

In the very early stages of aviation, control of an aircraft was based purely on visual feedback and sensorial perception: flying ‘by the seat of the pants’. Such instruments as were available in the cockpit were very basic and limited in their capacity. As aircraft complexity has increased, more information and more complex instruments have become available.

In line with this development, the early trend was to include an increasing number of displays, including instruments and gauges, up until about the 1980s. Since then there has been a recognition of the limit of the amount and type of instruments which can be usefully presented to a pilot. The ability of a human pilot to process information is more important than ever and ergonomics is now an integral part of instrument design. This has led to a reduction in the number of instruments, together with an improvement in the quality and presentation of the information provided in order to improve understanding.

As with manned aviation, it is useful to employ visual displays which can present operational data in a quick and intuitive way during a UAV mission. This simplifies platform operation and allows pilots to focus on the most relevant information.

The representation of this data in real-time provides the operator with critical information upon which to make critical decisions regarding preventative actions or emergency procedures.

Visionair, UAV Navigation’s Ground Control Station (GCS) software, allows customization of gauges in order to facilitate monitoring of a flight. In order to provide the intended function, gauges should ideally be large, legible, well-lit and easy to see. In addition, they should be placed on the screen in a convenient part of the operator’s field of view. Visionair makes all of this possible, providing for full customization of the interface.

In addition to providing this real-time information, Visionair also allows for real-time analysis of the telemetry stream via a series of fully customizable ‘Charts’, which allow for a detailed evaluation of aircraft performance. 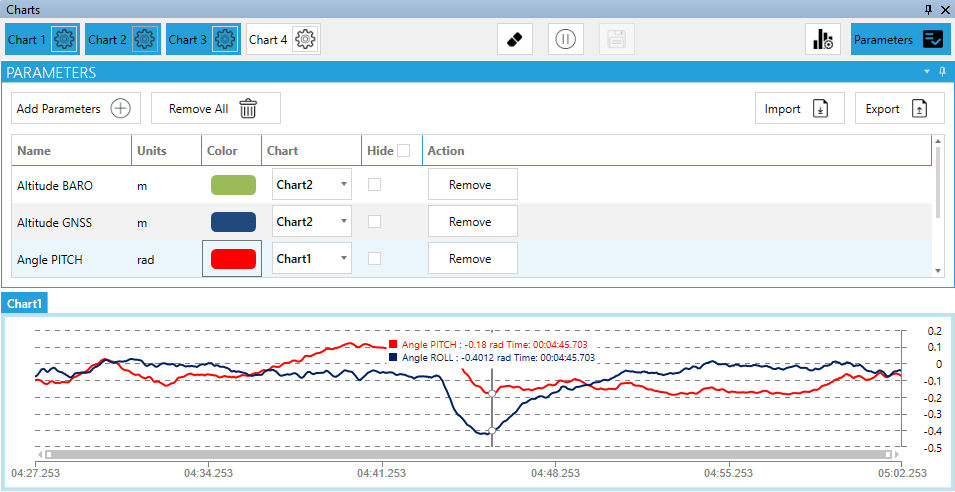 Visionair Gauges and Visionair Charts are a major improvement to the system, presenting critical information in an intuitive and easy to assimilate format, thus increasing flight safety.