A Field Programmable Gate Array (FPGA) is essentially a re-programmable integrated circuit in the form of a chip.

FPGAs are used in many different fields, including military applications, machining industries and the aeronautical industry.

These chips may be configured in order to implement different and custom functionalities. In addition, because an FPGA is reconfigurable it can adopt a different behavior each time it is programmed, changing the configuration of its internal circuits.

FPGAs offer excellent reliability without requiring a high level of resources. In contrast to a traditional Central Processing Unit (CPU), an FPGA can carry out various basic operations at the same time without competing for resources. Every task has an independent block allocated within the chip so that the task can be executed autonomously without affecting other blocks. This feature allows FPGAs to perform extremely well. 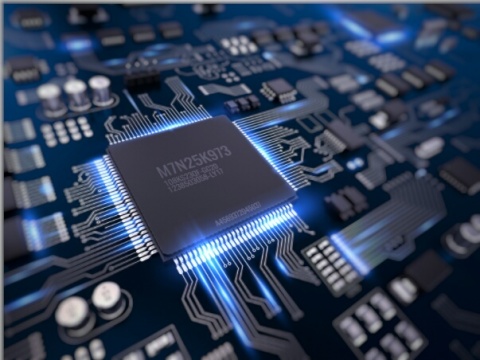 Due to its reliability and flexibility, the FPGA is particularly suited for use in critical and high risk risk applications. Its configurability allows for a considerable improvement in security, thereby leading to increased reliability in the operation which the FPGA is controlling.

VECTOR’s FPGA is used to monitor the correct behaviour of communications with peripherals. Thanks to the processing capabilities mentioned above, plus the high speeds based on Random Access Memory (RAM) technology, the integration of datalink types that would not be possible without it become possible. Furthermore, the FPGA can act as an arbiter responsible for managing the fast and accurate switch between the VECTOR’s twin redundant CPUs; this means that the autopilot features effective built-in redundancy in case of CPU malfunction.

These features described briefly above show the advantages of the FPGA over traditional PLD based systems and are the reason that UAV Navigation has opted to include an FPGA as a key part of the VECTOR’s architecture.