Thanks to this architecture, any point on the surface of the planet is visible by at least four satellites. Such GNSS systems have been a revolution in positioning, navigation and timing. GNSS systems are now an essential part of simple vehicle navigation, as well as more advanced tasks, such as surveying, earth science or photogrammetry, where precise position information is vital when taking pictures in order to obtain correct image information.

GNSS system logic consists of using the known position of a set of visible satellites with stable atomic clocks onboard. These satellites transmit precise timing signals to receivers on the Earth’s surface. Clocks inside the receivers, however, are generally less precise so any error introduced must be corrected. Such timing errors, together with a series of other influences on the signals, affect positional accuracy.

RTK.   One of the methods used to improve accuracy is a Real-Time Kinematic (RTK) system, which can reduce errors to as little as a couple of centimeters, as opposed to traditional GNSS precision where error is measured in meters.

RTK consists of a 'base station' and one or more 'rover' units which communicate directly between themselves. The known location of the base station helps the system to reduce errors. The base station broadcasts its position together with a code; the receivers are then able to fix phase ambiguities from satellite signals in order to determine their relative position to the base with a very high degree of precision. For this reason, when using RTK excellent radio coverage is always required and means that the system is not generally suitable for Beyond Line Of Sight (BLOS) flights.

RTK technology is widely used in the UAV industry to enable precision landing. Some landing techniques, such as net recovery of a UAV on a moving vessel at sea developed by UAV Navigation, require very high positional accuracy as even the smallest error may clearly lead to an accident. 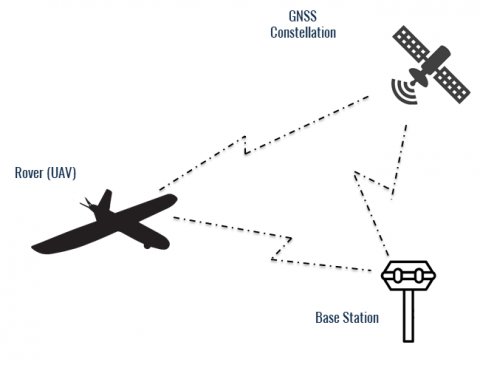 Dual GNSS Compass.   A similar technique is used in another technology: the Dual GNSS Compass. By utilizing GNSS interferometry techniques, the course of a vehicle or platform may be calculated. The baseline signal from the base station is received for two separate GNSS rovers on a platform; these separate receivers then calculate the phase variation of the signal, meaning that it is therefore possible to determine the orientation of the system. An added benefit of this method is that the effect of magnetic interference, such as electromagnetic noise (cabling, moving mechanical parts etc.), is minimized.

Dual GNSS Compass navigation enables accurate heading estimation under both static and dynamic conditions without any reliance on magnetic sensors. 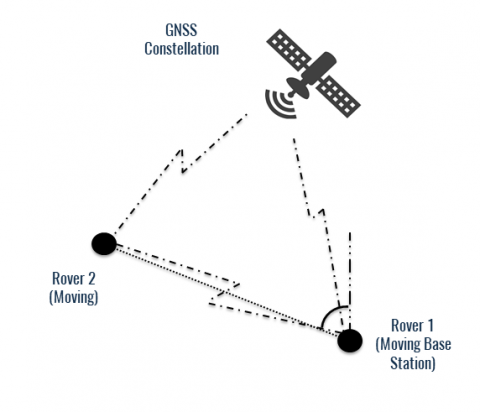 RTK systems have traditionally been expensive and so their use has generally been limited to some very specific maneuvers. Many autopilots on the market rely on RTK technology for a standard automatic landing on a runway. However, UAV Navigation autopilots only need a radar altimeter to complete this maneuver (thereby reducing cost and complexity considerably).

UAV Navigation is accustomed to providing professional, tailor-made systems for the most demanding customers. The final technology chosen will depend on the platform characteristics, mission profile, accuracy required, size and cost, amongst other factors.