1.   The navigation function forms part of the Guidance, Navigation and Control (GNC) system and consists of calculating a platform's location and velocity (also known as the state vector), as well as its orientation (or attitude). Navigation relies on input from a variety of sensors and subsystems.

2.   The output of the navigation function is the input for the control system, which in turn commands deflections of the control surfaces and values for other controls such as the engine. 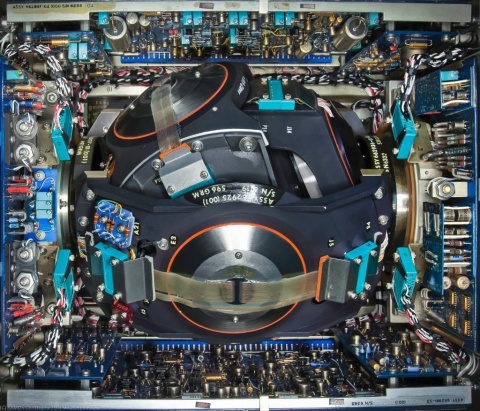 3.   Inertial navigation depends only on input from sensors directly contained within the platform and that have no reference to external, artificial input (e.g. GPS) and so is not susceptible to tampering or hacking.

4.   Aim.   The aim of inertial navigation, also known as dead reckoning, is therefore to determine the position, velocity and attitude of the platform by using onboard inertial sensors.

5.   Basic Components.   The essential components of an Inertial Navigation System (INS) and their setup are as follows:

The IMU intelligently compensates for the disadvantages of some sensors by fuzing input from others less affected, thus obtaining an output with reduced noise and less drift. The main problem with IMUs is that they naturally accumulate error during the process of integration of both angular and linear velocity.

7.   Data processing and the intelligent fuzing of information from a variety of sensors is a core strength of the UAV Navigation AHRS and sets it apart from other, inferior products which may fail to compensate for false readings, out of range readings or the lack of input in a particular environment (e.g. flying in a GPS-denied environment). The UAV Navigation system allows the execution of accurate, robust and reliable flight control under highly dynamic conditions, as well as in degraded environments.