The technology behind the sensors involved in inertial navigation has improved over the last few years, with precision increasing whilst both size and cost have reduced. Aside from these benefits, inertial sensors are a popular choice for system developers due to the fact that they are largely immune to jamming because they do not depend on outside elements such as a Global Navigation Satellite System (GNSS) system or VHF Omni-Directional Range (VOR) system.

Depending on the application, the following qualities of sensor may be identified:

The Space Inertial Reference Earth (SPIRE) was the first inertial navigation system created in 1953 as part of the navigation system of a B-29 bomber for a flight from Boston to Los Angeles. It used gyroscopes and accelerometers to determine position without relying on the transmission or reception of external signals that might reveal the aircraft's position or make it vulnerable to enemy interference. It was the first truly successful demonstration of inertial navigation. However, it was a massive piece of equipment (1.5 m diameter and 1200 kg): 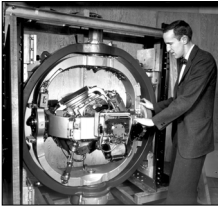 Another significant historical moment for inertial navigation was the APOLLO guidance computer which safely landed the Lunar Module on the Moon in 1968. Again, inertial navigation is of vital importance during space missions where it is not possible to use traditional GNSS constallations.

The most precise inertial navigation sensors have been designed for use in nuclear submarines and intercontinental missiles. The most precise sensor unit was the Advanced Inertial Reference Sphere (AIRS), installed in ballistic missiles in the 70's.  It has a drift rate of 1.5 x 10-5 º/ hour. However, AIRS features about 19,000 components and was extremely expensive to produce.

Unsurprisingly, the general line of development over the years has been to miniaturize and improve the sensors from the type used in SPIRE to a small cube that took humankind to the moon. Nowadays, inertial sensors are tiny chips that can be integrated into many consumer devices.

The progress of the technology has meant a reduction of components, less maintenance, lower costs, and more reliability. A visual representation of these trends can be seen in the following chart: 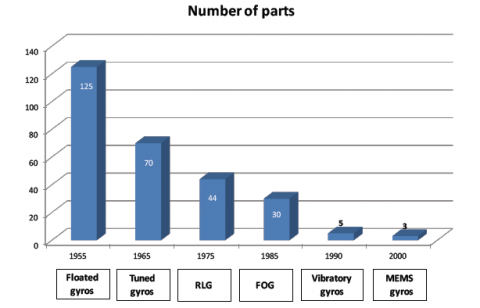 This reduction in size and weight has been exploited to the full in the aeronautical industry, where sensor manufacturers produce units that can be integrated in UAV flight control systems.

A brief comparison between the main types of sensor is as follows: 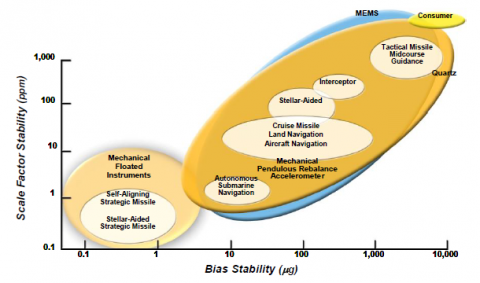 UAV Navigation products are currently based on MEMS technology, although the company is able to integrate high precision optical sensors for specific applications. MEMS technology has been chosen as the most suitable technology because high levels of navigation accuracy can be achieved for most UAV applications, within the budgets demanded by system integrators and UAV manufacturers. The key to UAV Navigation's success in this field, and what sets it apart from competitors, is the robustness of its Estimation software and the ability to extract the maximum precision from MEMS based products. This makes the company's products the ideal choice for the most demanding UAV applications.