UAV Navigation in depth: Magnetometer, why is it critical for UAV navigation?

Since the earliest days of aviation pilots have used a magnetic compass for navigation, using the instrument to show heading information.

Magnetometers used in aviation measure the Earth's magnetic field in order to show orientation. There are of two types: Absolute and Relative (classed by their methods of calibration). 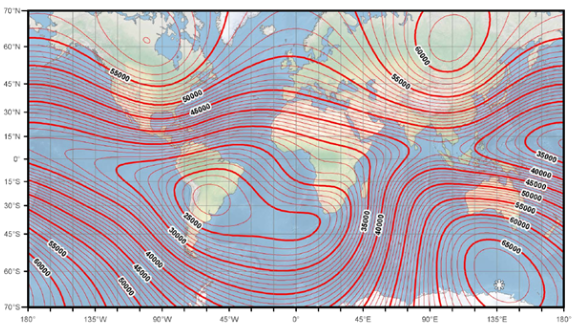 In addition to simpler heading magnetometers, Three-Axis Magnetometers (TAMs) are also widely used onboard modern aircraft. Small distortions in the magnetometer’s measurements typically occur during flight. When flying at high or low latitudes, the local magnetic field vector forms a significant angle with the local ellipsoid surface (in the case of Spain this equals approximately 55 degrees). In order to obtain magnetic measurements in two hemispheres of the ideal magnetometer sphere it is a requirement that the aircraft has at least one of the following capabilities:

The simplest absolute magnetometer, designed in 1832 by the outstanding German mathematician, Carl Friedrich Gauss, consists of a permanent bar magnet suspended horizontally by a gold fiber. The Gauss unit of magnetic induction is named in his honour.

Magnetic fields may be measured in various ways. The simplest technique still employed today is the use of a permanently magnetized needle that is mounted so that it can pivot in the horizontal plane. So long as there is no interference, such as the effects of gravity on the setup, the needle will align itself exactly along the local magnetic field vector. If gravity is allowed to affect the needle’s performance then the effect of gravity will become a component of the measurement. This is the reason why magnetometers are used for measuring heading.

The magnetometer is therefore an instrument for measuring both the strength and direction of magnetic fields.

An extremely accurate and robust heading may be calculated by using a magnetometer and combining it with the data from GNSS and IMU sensor packages. 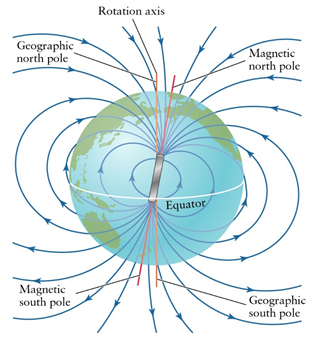 The following diagram shows the magnetic meridians of the Earth's magnetic field:

A common approach used to estimate heading is to calculate the orthogonal components (Hx/Hy) of the magnetic vector as follows:

This is correct when the aircraft is completely level. However, when some tilt is present, this calculation is not precise.

Although the magnetic compass is generally a reliable instrument due to its simplicity, it is also prone to errors and sometimes difficult to interpret.

In addition, as is well known, the Biot-Savart Law establishes that electrical currents may induce a local magnetic disturbance. For this reason, the presence of electrical devices near a magnetometer may cause disturbances in the measurements obtained.

Dip Error.   As already mentioned, when calculating heading in most small aircraft, the most commonly technique is the magnetic compass.

Errors suffered with this kind of compass may be caused by several types of error, including that created by the ‘dip’ or downward slope of the Earth's magnetic field. Dip error causes the magnetic compass to read incorrectly whenever the aircraft is banking, and also during acceleration or deceleration. This phenomenon creates problems for the use of magnetic compasses in any flight condition other than unaccelerated, perfectly straight and level flight. 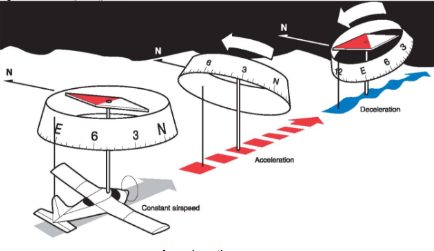 Turning Errors.   In a coordinated turn the magnetic compass, like the occupants of the airplane, feels an effective gravitational force along the vertical axis of the airplane, which causes the compass card to bank out of the horizontal.

Suppose for example, an airplane (in the Northern Hemisphere) is conducting a coordinated turn on a heading either North or South. In each case, because of the magnetic dip, the North seeking end of the compass swings downward, so that the compass no longer precisely indicates North or South respectively. 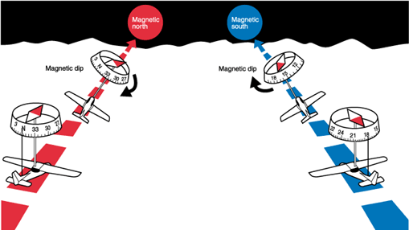 The magnitude of the resulting error, known as ‘Northerly Turning Error’, depends on the heading, the direction of turn, the angle of bank and the dip angle.

On East or West headings there is no error caused by magnetic dip.

Tilt Errors.   To avoid tilt errors, a 3-axis magnetic sensor with an additional accelerometer may be used. The 3-axis sensor provides information about the Earth’s magnetic vector coordinates and the accelerometer sensor measures the angles between the compass and gravity, so that the heading vector components may be estimated and the error subtracted from the reading.

Error Correction in UAV Navigation Systems.   The Company’s systems are designed to take into account the effects of all these types of error. Information is used from accelerometers in order to reduce error and to provide the most accurate and robust heading information possible. 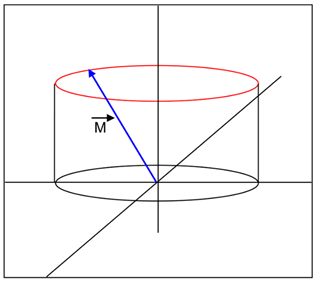 The presence of an additional constant magnetic field, known as Hard-Iron, will distort this sphere by shifting its origin.

The presence of an additional induced magnetic field dependent on the TAM orientation, known as Soft-Iron, will distort this sphere by transforming it into an ellipsoid.

The more ferromagnetic parts, and/or magnetic effects induced by electrical circuits, the vehicle has the stronger the Hard and Soft iron effects are. 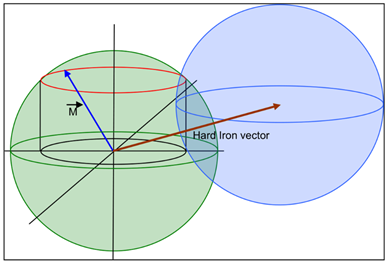 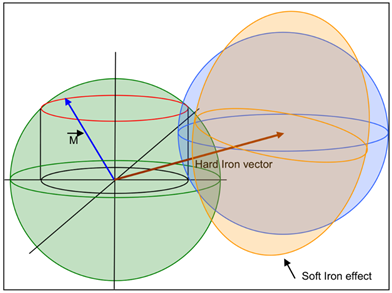 Additionally, misalignment or non-orthogonality of the individual sensors may shift or rotate the axis of measurement. This is typically due to thermal gradients within the magnetometer or to mechanical stress from the aircraft.

Non-magnetic effects, such as rotating the TAM too fast while collecting measurements (angular speeds greater than 150 degrees per second approximately) may further locally distort the ellipsoid.

Calibration of the magnetometer will eliminate (ideally) or greatly reduce (in practice) these magnetic errors.

All UAVs must have some method of measuring heading accurately in order to be able to complete a mission safely. Usually this heading information is supplied by a magnetometer, although the accuracy and reliability of this instrument may be augmented by using other systems such as GNSS or an IMU.

Magnetometers are critical for rotary wing platform operations as they provide information about the orientation of the platform when hovering or when the GNSS system information is unable to define it with sufficient accuracy.

Conversely, for most fixed wing platforms heading information can be derived from a GNSS system (because the aircraft is always moving forward and therefore establishes a ‘trail’ of readings). However, GNSS alone cannot provide all the heading information as this method does not take into account any yaw angle which the aircraft may experience. The use of a GNSS system alone may also lead to navigation problems if the GNSS signal is lost or degraded, or if there is excessive cross wind (‘crab angle’). For this reason magnetometers are used in fixed wing platforms in order to provide additional data for the heading calculation and also for redundancy (to detect and isolate sensor failure).

One of the primary aims of the UAV Navigation flight control system is to ensure the integrity of the platform via multiple redundancy. In case of other subsystems failure (e.g. GNSS), heading will be calculated using measurements from the magnetometer.