Lightweight materials were used to build this twin-engined, turbocharged, long-range, high-altitude airplane designed for safety and performance. Its innovative, asymetrical design provides uniqu e safety advantages in the event of an engine failure. The Boomerang was designed by aviation legend, Burt Rutan, who flew it from 1996 to 2002 as his personal plane.

Tres Clements, a former employee at Burt Rutan’s company, Scaled Composites LLC, took over the extraordinary plane in 2011. He is flying it and promoting its unique features with the help of a team that includes former Scaled Composites’ employees, test pilot Mike Melvill and engineer Ryan Malherbe.

During the Oshkosh 2012 AirVenture meeting, Boomerang’s avionics were revamped and UAV Navigation’s EFIS system was installed on the airplane’s instruments panel.

More than 10,000 aircraft and 500,000 aviation enthusiasts from more than 60 countries attend the Oshkosh annual gathering in what has been described as “The World's Greatest Aviation Celebration".

Guillermo Parodi, UAV Navigation’s CEO and founder, commented: “The Boomerang is one of the most innovative planes to fly in two decades. When we saw it reappear at Oshkosh 2011 at the hands of Tres Clements we could not help noticing that its avionics were based on a 1990’s Apple PowerBook! So we jumped on the opportunity and offered our new EFIS system”. 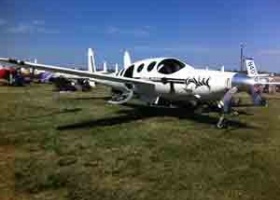