UAV Navigation, a leading developer of flight control avionics and motion processing solutions, announces that it will sponsor a plane at the Reno National Championship Air Races and Air Show from Wednesday 9 thru 15 September 2013.

Guillermo Parodi, UAV Navigation's CEO and co-founder, will once again be piloting the aircraft. Plane nº36, callsign 'N-A-RUSH', is a Cassutt Special III, a single-seat monoplane racer designed in the United States in 1951 by ex-TWA captain Tom Cassutt.

The Company's team will be using UAV Navigation's own Electronic Flight Information System (EFIS), based on the highly successful AP04OEM2 attitude and heading reference unit, as the Primary Flight Display (PFD) data source

UAV Navigation's EFIS will provide a complete instrumentation system for the plane, including: Primary Flight Display (PFD), Horizontal Situation Indicator (HSI) and Engine Monitor (EM). All these functions are based on a core of the AP04OEM2 Attitude and Heading Reference System (AHRS), which is the heart of the EFIS. In line with UAV Navigation's philosophy for proving its designs, the Reno Air Race is an ideal environment to test products in an extreme environment with highly dynamic flight conditions; in this case the EFIS will be relied upon to operate faultlessly up to 10G acceleration - the kind of environment where lesser systems simply can't handle the pressure. UAV Navigation has extensive experience in other motorsport events. It supplies the telemetry system used in the RedBull Air Race and other world class motorsport events such as MotoGP. These extreme events provide a highly visible and challenging environment for the company’s equipment. Prototypes and concepts can be tested in real, demanding environments and later translated into final products for general aviation, unmanned systems and UAV Navigation's OEM markets.

Guillermo Parodi commented: "The 2013 Reno Air Races is an ideal opportunity to put the next generation EFIS (Electronic Flight Instrument System) through its paces; we've been working hard to ensure seamless integration between the AP04OEM core and the additional functionality provided by the Engine Monitor and other peripheral systems. The EFIS is now the most rugged, reliable and complete PFD of its type in the world - no pilot should be without one. The EFIS is an important part of our strategic vision for the manned aviation market."

The Reno National Championship Air Races is the last pylon-racing event in the world. The latest edition will bring seven classes of aircraft racing around the unique course, anywhere from 50 to 500 feet above the ground flying wing-tip to wing-tip at speeds exceeding 500 miles per hour. For aviation enthusiasts, it is truly an event not to be missed. The plane that UAV Navigation sponsors participates in the Formula One Class. Formula One aircraft are all powered by the Continental O-200 engine. The fastest Formula One aircraft reach almost 250 mph on the 3.12-mile race course in Reno. Many Formula One aircraft are built by the pilots that race them and are a relatively inexpensive way to enjoy the excitement and satisfaction of air racing. 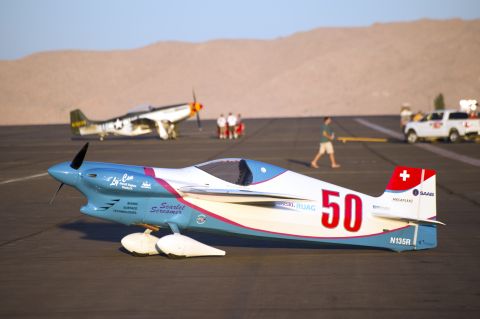