UAV Navigation and Sagetech Avionics, Inc. have recently collaborated for the integration of the MX family of transponders with the flight control solution. With that, this model has become entirely compatible with VECTOR, UAV Navigation’s flagship autopilot. UAV Navigation is fully aware of the sheer need to address one of the biggest challenges in the industry, which is the coexistence of numerous manned and unmanned platforms.

One of the technological challenges faced by companies involved in the aerospace sector is the coordinated, efficient and safe operation of all these vehicles under the air traffic regulations. Therefore, the first logical step should be an improvement in the identification of every aircraft in flight, which will allow to locate and to be located by surrounding aircraft or by the ATC. This is what is commonly known as UTM (Unmanned Traffic Management). 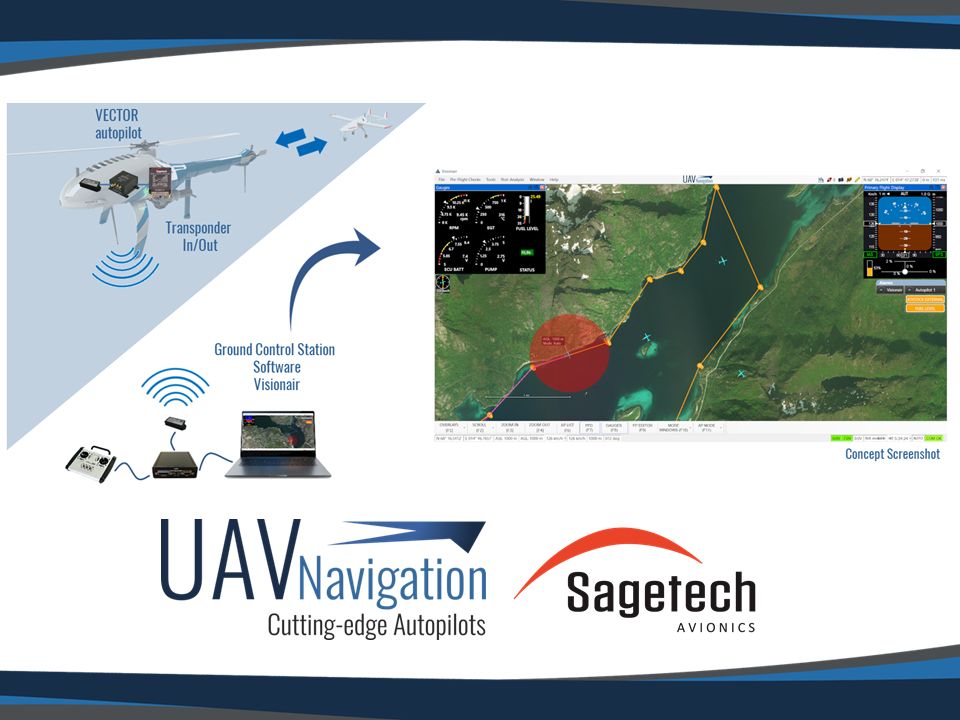 In an unmanned aircraft, this system is responsible for the detection and prevention of potential collisions. This system will soon be included in UAV Navigation’s systems.

There are three different levels of ACAS:

The incorporation of Sagetech Avionics’ devices with UAV Navigation’s technologies will result in ACAS I. The resulting sense and avoidance system will not use the same technology as TCAS as it uses ADS (Automatic Dependent Surveillance), but it will get the same result with a modern and easy to integrate technology in the UAVs.

UAV Navigation’s autopilots, with more than 60,000 flight hours have shown their capability to perform long-range operations, under extreme conditions or in dead-reckoning environments, even if the communication with the GCS is lost during the operation. However, in its pursuit to increase the operational safety, UAV Navigation has established this strategic alliance with Sagetech Avionics.

This collaboration not only allows direct compatibility between the products offered by these two companies, but also paves the way for a better understanding. It allows a better comprehension of the necessities of the final operators in order to develop a technology that will allow facing new operational and legislative challenges, in the near future.

Transponders are devices that transmit different parameters from the aircraft (position, altitude, ID...) to the control tower or compatible receivers. There are OUT transponders, which transmit the information without being able to receive data from  other aircraft. Also, there’s another type, which is the IN/OUT transponder, which works both as transmitter and receiver.

With the integration of the MX family of transponders , the small-sized and lightweight devices developed by Sagetech Avionics for UAVs, UAV Navigation has started developing a new sense and avoid system for unmanned aircraft: Sagetech’s ADS-B  In and Out and antenna diversity capabilities, along with its integration with VECTOR, allows the autopilot to be able to know the surroundings aircrafts’ position and to send this information to the Ground Control Station, Visionair.

The mission control software will release automatic alerts to make the operator aware of other aircraft’s proximity. Thanks to this procedure, the operator will be able to evaluate the execution of avoidance actions such as loiter, hover or an altitude change. This lays the foundation to develop automatic avoidance maneuvers in the future.

With this integration, UAV Navigation shows its ongoing commitment to increasing the system’s capabilities. UAV Navigation aims at providing its customers with an integrated solution for the control, navigation, and management of unmanned aircraft. Also, it is indicative of UAV Navigation’s R&D potential, which is critical for delivering cutting edge solutions.