Once again, UAV Navigation has successfully proven the reliability of its autopilots and flight control systems, this time having integrated its autopilot into a 3.8m fixed wing, piston-engined observation UAV for VITO, a Belgian research and technology organization.

Two identical UAVs were delivered which will be operated as part of the company's pioneering work integrating UAVs within a controlled airspace. Other projects will include photogrammetry, coastal surveillance, aerial agricultural assessment and contamination control (oil spills etc).

UAV Navigation's mission was to integrate all systems in the aerial platform, including: autopilot IP-based datalink Differential GPS navigation, dual EO/IR camera, ADS-B transponder, parachute, Engine Control Unit and other onboard systems. In addition, a number of custom features requested by the client were integrated into the standard Ground Control Station, such as automatic flight plan generation based on a polygon drawn on the map (this assists in accurately scanning defined areas with the camera), a fuel gauge and remote transponder control. Finally, the platform complies with current Belgian UAV regulation, having been fitted with navigation and strobe lights, plus the ability to report altitude via either GPS or barometric pressure.

Following a two-year period of platform development, from May 4th to 8th 2015 an acceptance testing took place at the Weelde airfield near Ravels in Belgium. Despite weather conditions which were not good, with a 20 km/h crosswind gusting to 40 km/h, the two identical aircraft were successfully put through their paces and passed all tests with flying colours. 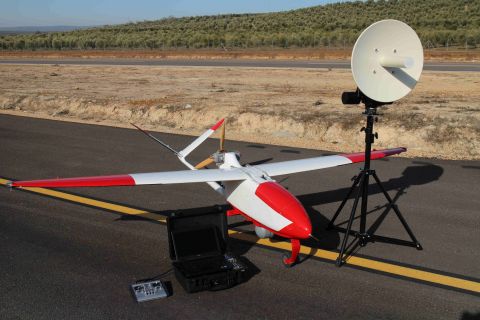 Salvador Fernandez, one of the founding partners of UAV Navigation and a highly experienced UAV operator stated:

"This project represents a technological milestone in the UAV industry for this kind of platform; never before has this level of compliance been seen in a UAV of this size. Together with Vito, we have demonstrated that the operation of a UAV in controlled airspace can be safely achieved whilst complying with current regulation."

The system is capable of completely automatic operation from take-off to landing, with no external pilot input necessary; operated by one person using Visionair, UAV Navigation's intuitive and mission-oriented user interface program.

UAV Navigation's Team is committed to pushing the boundaries of what is possible with UAVs of this kind. It is always delighted to participate in challenging projects such as this one that give an opportunity to prove that the Company's autopilots and flight control solutions are at the cutting edge of what is possible.

UAV Navigation looks forward to participating in future tests with VITO's UAVs, pushing the limits and flying under different conditions.