1.   One of the basic and most important skills that any human helicopter pilot learns and must practise on a regular basis is the ability to autorotate safely. This is so that in the event of engine or tail rotor failure the aircraft can be safely descended and landed under control. Although there are obviously no human aircrew, for helicopter UAVs there is also a requirement to minimise (or indeed eliminate) any danger to people on the ground and also any damage to the UAV which might be caused by an engine or tail rotor failure.

2.   Autorotation is defined as a state of flight in which the main rotor system of a helicopter or similar aircraft turns by the action of air moving up through the rotor disc, as with an autogyro, rather than engine power driving the rotor. Autorotation is therefore analogous to the gliding flight of a fixed-wing aircraft.

3.   In normal powered helicopter flight, air is drawn into the main rotor system from above and exhausted downward, but during autorotation, air moves up into the rotor system from below as the helicopter descends. Autorotation is permitted mechanically because of both a freewheeling unit, which allows the main rotor to continue turning even if the engine is not running, as well as aerodynamic forces of relative wind maintaining rotor speed.

4.   UAV Navigation's VECTOR autopilot is one of very few autopilots to have a fully functional autorotation capability. This capability was developed as part of the requirement for a Tier1 customer using an Enstrom 480B helicopter which was converted from a standard manned aircraft into a UAV in 2017. The functionality has been further tested and demonstrated on other smaller UAVs, including a conventional configuration 2m rotor disc, piston-engined helicopter.

5.   The physics of autorotation ('auto') are complex. The following informal description aims to give a very basic understanding of the forces involved.

PHYSICS OF AUTOROTATION - THE BASICS

6.   To discuss the way a rotor blade works during an auto, it is useful to think of it as the symmetrical wing of an aeroplane. If the wing is pointing upwards slightly as it flies through the air it develops lift partly because there is a greater air pressure under the blade than above it. Put your hand out of the window of a fast moving car and you’ll soon feel this working. Tilt your hand up a little at the front and immediately you feel the lift. With helicopters we call this positive pitch and if you tilt your hand downwards (negative pitch) you get the opposite effect.

7.   However, if we look more carefully at what’s going on here, there are other forces at work. You don’t get this lift for free - something has to provide the energy for the system and in an aircraft, this is supplied by the engine. Wind turbines work the other way around: moving air, acting on a ‘rotor blade’ with negative pitch causes the rotor blades to rotate resulting in the production of useful energy.

8.   It is not sufficient, however, simply to provide a set amount of negative pitch. Although a certain amount of cyclic control might be preserved, it would not be efficient and will not result in a controlled descent to the ground. More control of aircraft attitude (incidence to relative wind) and collective pitch is required.

9.   An aerofoil moving through the air creates drag. Drag ‘pulls’ on the rotor blade in the direction of the ‘inflow’ (the direction from which the air is approaching the rotor blade). When the helicopter is sitting on the ground with the blades turning the air will effectively be approaching each blade horizontally, i.e. at right angles to the axis of rotation. However, during an autorotation the helicopter is descending and therefore the air is actually approaching the blade slightly from beneath. If the blade is going round very fast then this angle tends to be shallow and conversely, if the blade is turning relatively slowly then the angle is greater (See Diagram 1). 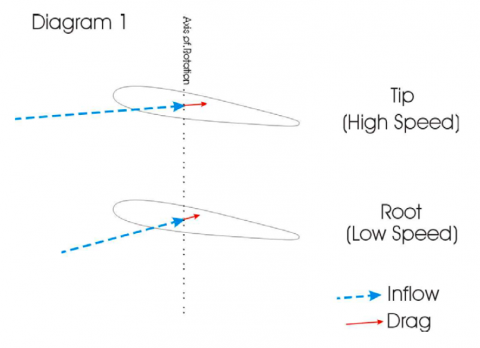 10.   We also must consider the fact that unlike the wing of an aeroplane the rotor blade is going round in a circle and the tip is going round much faster than the root. This implies that the inflow angle will vary all along the length of the blade. This point is crucial to the physics of autorotation.

11.   The next force to consider is lift which is at right angles to the inflow (see Diagram 2). Note that the length of each force line is intended to give an idea of the relative strength of that force, i.e. a short line represents a weaker force than a long one. These lines are known as vectors. 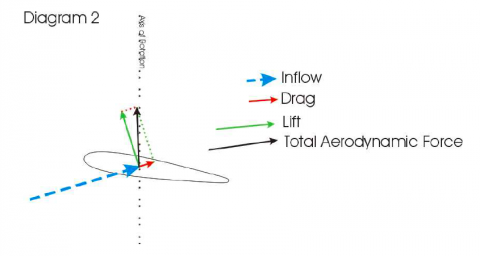 12.   The effects of lift and drag combine to form the ‘total resultant aerodynamic force’, in other words the result of adding these two forces together. Using positive pitch within certain limits it is possible for this combined force to be in front of the axis of rotation (as in the diagram) and it will tend to drive the rotor blade forwards. If it is behind the axis of rotation it will tend to slow the blades down.

13.   The result of this means that a human pilot, and also the VECTOR autopilot, is capable of setting the collective and cyclic pitch of the blades to precise, positive angle of attack where the root of the rotor blade is stalling, but the tip of the blade is being driven around and generating lift in the same way as if the engine was still engaged and the middle section of the blade is in a special state where it is both creating lift and driving the rotor around. This is represented in Diagram 3.​

14.   In 'Stall' part of the blade (the root), the inflow is hitting the blade at a fairly large angle because at this point the rotor blade is not rotating very fast. Looking at the force vectors, we can see that the lift is small and the drag is relatively large so at this point the forces will tend to slow the rotation of the blades. This is known as the stall region.

15.   In the 'Driven' part of the blade (blade tip) the blade is travelling at a much higher speed through the air, the inflow is approaching the blade at a much shallower angle and although there is greater lift there is also greater drag resulting in a combined force that is behind the axis of rotation, i.e. tending to slow the blades down. This is known as the driven region because this part of the blade has to be driven through the air to keep it rotating.

16.   In the 'Driving' part of the blade the inflow is at an angle which produces good lift and that the lift and drag combine to produce a force that is in front of the axis of rotation, in other words driving the rotors round. This is known as the driving region.

17.   The key point is that maximum efficiency in the autorotation is achieved by balancing the driven and driving regions to produce the slowest possible descent.

18.   It is clearly not enough for the autopilot simply to continue to apply positive pitch when an engine failure is detected; the positive pitch will cause the blades to stop turning and the aircraft will drop like a stone. Neither is it enough for the autopilot simply to set a very high negative angle of attack; the helicopter will start to descend very rapidly and the inflow will be at such a high angle that the blade's entire length will be in the ‘stall region’.

THE TWO PHASES OF AUTOROTATION

19.   The use of an autopilot to make a controlled autorotation descent can be split into two phases:

19.1.   Phase 1 - Autorotation.   During this phase the autopilot must detect the engine or transmission failure and the subsequent lack of power to the main rotor. It them must manage collective pitch, ensuring a balance between rotational speed and lift. To achieve this the UAV must be equipped with a sensor which feeds main rotor RPM information to the autopilot.

19.2.   Phase 2 - Flare and Landing.   As the helicopter approaches the ground it is necessary for the autopilot to reduce the rate of descent in order to produce a safe touchdown speed (the 'flare' manoeuvre). In order to measure precisely the remaining distance between the aircraft and the ground a radar or laser altimeter or similar device must be fitted to the UAV. The ability of the aircraft to perform the flare will also depend on the amount of energy stored in the rotor disc, hence the requirement for the autopilot to manage the descent correctly.

20.   For more information about the VECTOR's autorotation capability and to learn how it can be used to enhance helicopter UAV platform security, please do not hesitate to contact UAV Navigation.