The helicopter platform offers a very particular set of advantages over its fixed wing counterpart and this has led to its use in a wide variety of operational scenarios where vertical take-off and landing, and often also the ability to hover, is required. In addition, the capability to operate from unprepared landing sites distinguishes it from fixed wing platforms which for the most part require a prepared runway. Such unique flight characteristics have seen the use of helicopters in urban areas, the jungle, mountains, the desert and in maritime environments to name but a few.

The challenges facing manufacturers of Flight Control Systems (FCS) for use on helicopter type UAV platforms are considerable. It is widely accepted in the industry that the control aspects of helicopter UAVs are more challenging than for fixed wing, and added to this the nature of helicopters means that there is often a high level of vibration, coupled to a 'noisy' magnetic environment. Added to this, the environments in which helicopters are often called upon to operate mean that a helicopter UAV's subsystems, including the autopilot, may be subjected to a broad range of temperatures, icing conditions, extremes of altitude, humidity, sea-salt etc.

UAV Navigation has dedicated many years to the development of autopilots which are designed with these very specific characteristics in mind. Whereas other supposedly 'high quality' helicopter autopilots are limited to, at most, offering coordinated turns (many don't even do this), the helicopter UAV software developed by UAV Navigation goes much further and is able to extract the best possible aeronautical performance from a helicopter platform. This starts with safeguarding the flight envelope of the platform and enables a similar level of safety and efficiency for guidance and navigation which is accepted practice for manned helicopters.

The following examples show how UAV Navigation's flight control solution for helicopter UAVs is superior in a variety of subtle but important ways to its competitors.

In the following diagram (Picture 1) we can see how a helicopter makes a 90º right hand turn. On the left, UAV Navigation's autopilot controls the tail in a banked, coordinated turn which is the most efficient way to execute the manoeuvre.

On the right, an inferior autopilot allows the tail to drift either too much, or not enough, so that a 'slipping turn' is executed. This is not fuel efficient and puts undue stress on the platform. 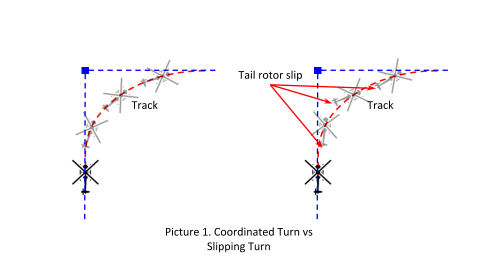 In the next example we see how a helicopter UAV flies in a straight line.

Firstly (Picture 2a) there is no crosswind and there is no reason for the tail to 'step out' or slip.

In Picture 2b, an inferior autopilot flies a helicopter UAV in a straight line in a crosswind condition. The autopilot commands the tail to 'fight the wind' and keep it in line with the overall heading of the aircraft. This is not only hugely inefficient, but it also places great stress on the structure and components of the aircraft. Incidently, it is also likely to create more noise. This is definitely not what a competent human pilot would do and is a good example of how an inferior autopilot may at first glance appear to control a helicopter adequately, whilst in fact it is doing a very poor job indeed.

In Picture 2c a UAV Navigation autopilot flies the same helicopter UAV in a straight line in the same crosswind condition. In this case, the autopilot takes account of the prevailing wind condition and controls the helicopter to follow the track whilst maintaining the most efficient profile, pointing the nose into the wind. Again, this is what a human pilot would instinctively do. 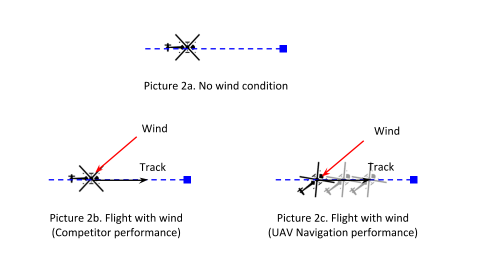 A more advanced example of how UAV Navigation's autopilot is superior to other products is the transition from hover to forward flight on a given bearing which is different from the current yaw position.

In Picture 3a an inferior autopilot controls a helicopter UAV from the hover towards a waypoint which is on a bearing of 90º from its current position. However, the helicopter starts with its nose pointing to approximately 45º. The autopilot therefore heads off on a bearing of 45º and only later is able to make the actual track coincide with the desired track towards the waypoint.

In Picture 3b, UAV Navigation's flight control solution ensures that when moving away from the hover towards the waypoint the helicopter's nose is gradually brought round to coincide with the bearing to the waypoint. This, again, is what a human pilot would do and is the most efficient and direct way for the helicopter to reach the waypoint.

A more advanced example of how UAV Navigation's autopilot is superior to other products is the transition from hover to forward flight on a given bearing which is different from the current yaw position. 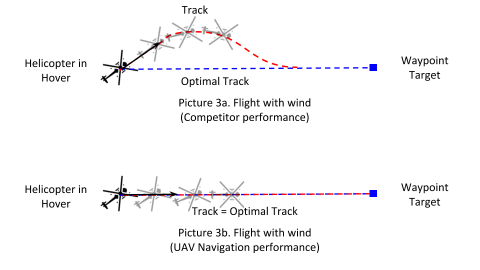 In addition to these kind of advanced flying characteristics for helicopter platforms, UAV Navigation's autopilots include other special capabilities, such as altitude protection, gain scheduling and fully automatic autorotation.

For the best possible performance from a helicopter type UAV, whether it be conventional configuration, intermeshing rotor ('Flettner'), coaxial or tandem, UAV Navigation's range of autopilots, including the VECTOR, offers the very highest levels of performance, reliability and efficiency.